An African safari is perhaps one of the most iconic things you could do on a trip to Africa or anywhere! A safari can easily turn your trip into something unforgettable, but have you considered all the types of an African safari on the market?

There is a multitude of safaris that may suit your interests better than the classic African safari.

Traditional is famous for a reason, and if you find yourself unsure as to what kind of tour suits you best, then sticking with the classic might be suitable.

Where to go:
Game drives are synonymous with the African safari and can be done in destinations across Africa. The most famous of which is probably the Serengeti in Tanzania. The major attraction here is The Great Migration. The Great Migration also is known as the “Wildebeest Migration”, it generally moves in a clockwise motion through the Serengeti Plains in Tanzania and the Masai Mara Reserve in Kenya, and then back again forming one big circle. Each year, visitors from across the world come to watch millions of wildebeest along with gazelle and zebra charge towards better grazing areas in what is often dubbed as the ‘greatest wildlife show on earth’.

If you tend to be more active in nature, then a walking safari might be just the thing for you. This African safari puts a bit more of the adventure into your hands and allows you to walk the same grounds as the animals that you are hoping to see. A walking safari will likely take you around animals that are more comfortable around humans, it is a great chance to view a lot of Africa’s majestic creatures in the wild.

For the avid explorer, this is a wonderful tour that provides them with plenty of stories for years to come. If you are concerned by your physical fitness, lodges can adapt routes to your needs and often distances covered are quite short, so you may only walk a limited distance – especially if requested. A walking safari does not have to be an epic hike.

Where to go:
Widely regarded as the birthplace of the walking safari, South Luangwa National Park is one of the best places to go for walking safaris. South Luangwa is fast becoming one of the top parks in Southern Africa. With fewer visitors than some of the more famous parks and the 4 of the big 5 (no rhino), it is a fantastic wildlife destination and a great place to track wildlife prints on foot.

This sort of safari will provide you with views that you will not be able to get through any other safari option on the market. Soar over Africa’s breath-taking vistas and get a view of the wild animals living their normal lives and routines. While an aerial view might not get you up close and personal to any of the crowd favorite creatures, a hot air balloon tour of the African ecosystem will certainly be an impressive tale that any visitor will likely find themselves telling for years and years to come.

This tour is likely not the best choice for those that find they tend to have a fear of heights to any degree. After all, the point of the tour is to gaze at the animals on the ground below, and it is very hard to do that if looking down from great heights sends you into a panic attack.

Where to go:
When you think of balloon safari there are several locations that come to mind, including the Okavango Delta, Kafue National Park and Sossusvlei, each one offering a truly unique landscape, even better when observed from above. But what better than Africa’s original and most iconic safari destinations: the Masai Mara in Kenya and the Serengeti in Tanzania. 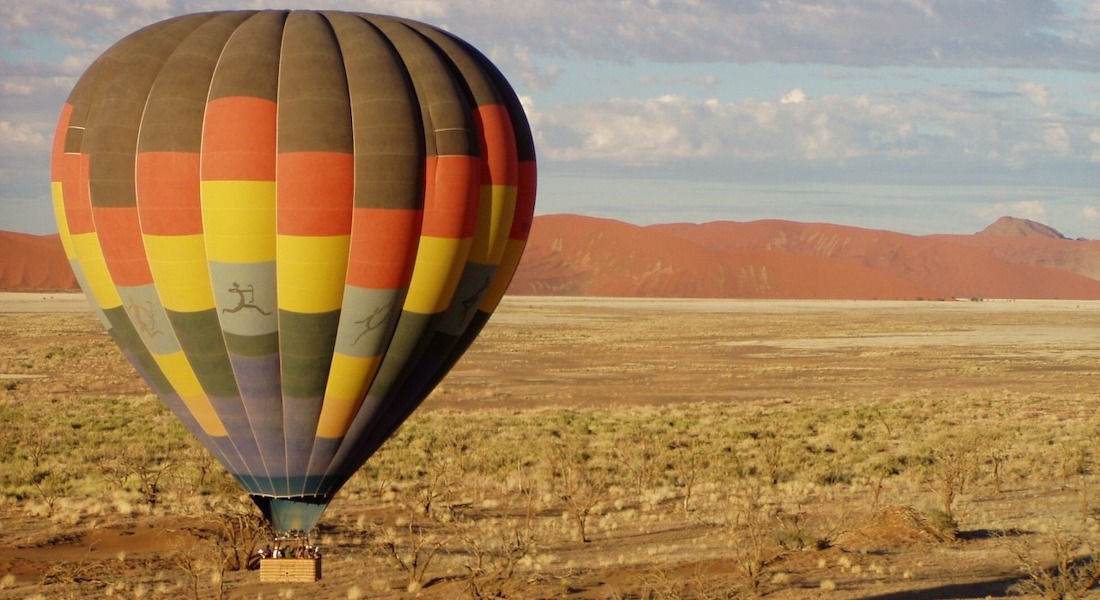 This safari is one that will cover multiple days, and it creates a multitude of opportunities for you to have a one of a chance encounter with the animals of Africa. Sleeping in the wild for nights on end with the sound of the bush as your soundtrack – wow! Mobile camping safaris tend to move on every 3-4 days, a team will go ahead and set up camp for the night whilst you explore the bush.

The camp doesn’t have the luxury touches of the typical safari lodge but all the amenities are there including, and most importantly, a comfy bed. If you want a back to basics, authentic safari experience then this is for you.

Where to go:
Botswana is the place to go for a mobile camping safari. Famous for its vast areas of pristine wilderness, with almost 20% of the country devoted to fenceless national parks and private game reserves, allowing wildlife to roam free. The isolated campsites in Botswana’s safari-friendly landscapes, whether in the Okavango Delta, the Central Kalahari Game Reserve or elsewhere, meaning there is no light pollution either. The only light you will see is the moon, stars and the occasional lantern!

#5 Gorilla and Primate Safari and Tracking

This safari takes you more onto the scientific side of things by allowing you to follow along with a group of tracked gorillas and primates in the flush forests of Uganda and Rwanda. Already, this safari type manages to stand apart from the others that are available. Perhaps most noticeably, it takes the concept of a safari off of the Savannah grasslands, and into the leafy canopies of more forested areas.

As you follow the tribe of primates, you will find that you are able to glean a much more intimate view of the lives of the wild animals of Africa, as well as get a hint as to what it would actually be like to be a scientist tracking and studying the animals for a living. If you love the science that goes into understanding the world of wild animals, then this is the perfect safari for you to embark on.

Where to go:
Uganda and Rwanda are the top gorilla tracking destinations. Each offers a fantastic gorilla tracking experience. If budget is a factor, as it often is, then Uganda may be the better option for you – a gorilla permit in Uganda is $600 USD set to rise to $700 USD in July 2020 compared to $1500 USD in Rwanda. The price of the permit may seem expensive but it is essential to protecting the gorillas, with portions of the permit costs going to various people from rangers to veterinarians. 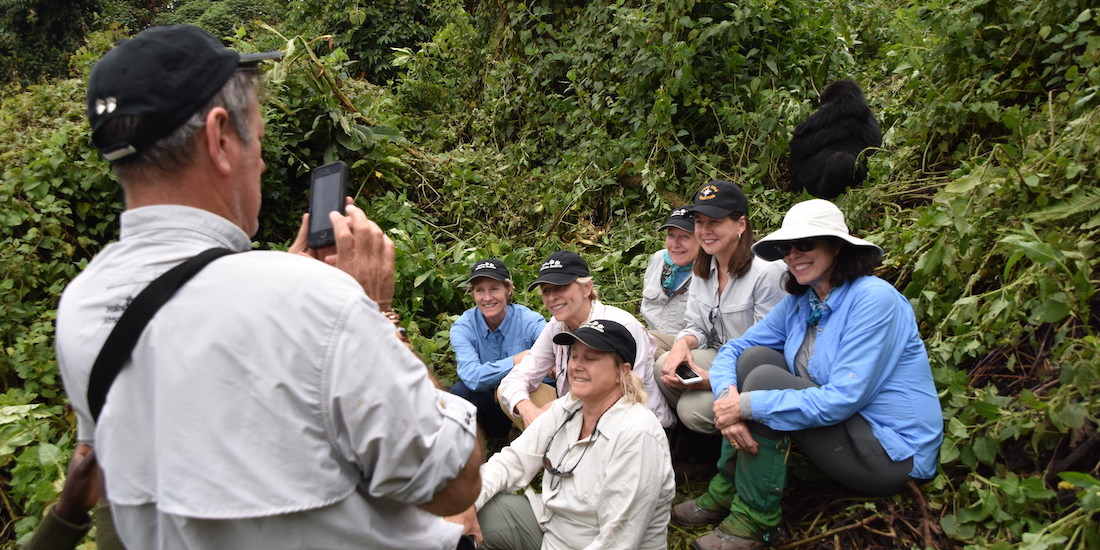 This quaint safari route can be viewed as a call-back to the early days of exploration in Africa. While a horseback tour can leave you saddle sore, it will also leave you with a variety of interesting encounters while on the safari.

Climbing into the saddle will likely invite a few of the more curious creatures to come closer and try to figure out just what you and the horse really are. It is a chance to get up close and personal with some of the gorgeous animals that Africa is known for. After all, that is the main draw of a safari is it not?

It is a chance to see animals as they are in the wild, without worrying about disturbing or frightening them too terribly. You will be perfectly safe on your horseback safari, but it certainly is not a tour for the faint of heart.

Where to go:
Horseback safaris are available across the continent, but one country offering a truly unique experience is Namibia. Its stark and striking landscapes will take your breath away. Imagine traversing sparse, wide and varying terrains, spotting elephant, rhino and lion – all adapted to life in the desert.

#7 Water-based Safaris by Canoe or Boat

Leaving the jeeps behind to follow the waterways of Africa’s vast and varied landscape is a fantastic way to be able to see a plethora of African animals at the one place that brings life to all of them. The vast majority of creatures will travel to a source of water at some point or another, meaning it is that much easier for a traveler to be able to catch sight of even Africa’s most reclusive creatures.

When you find yourself following waterways, you are bound to run into an animal of some type sooner or later – especially in an area like Africa, that has such a broad spectrum of species. It is probably better to choose a different tour if you find that you do not tend to care for boats or for getting too close to more aquatically based creatures. But for those that enjoy a day on the water, this is the perfect tour.

Where to go:
Head to Botswana and experience the Okavango Delta. One of the largest inland deltas in the world and home to huge concentrations of wildlife. The Okavango Delta is famous for its canoe safaris or as the boat is rightly called a mokoro. It is a traditional dug-out canoe which has become an iconic symbol of the delta. You can sit in comfort, spotting wildlife as the polers tranquilly chauffeur you through the winding waterway. 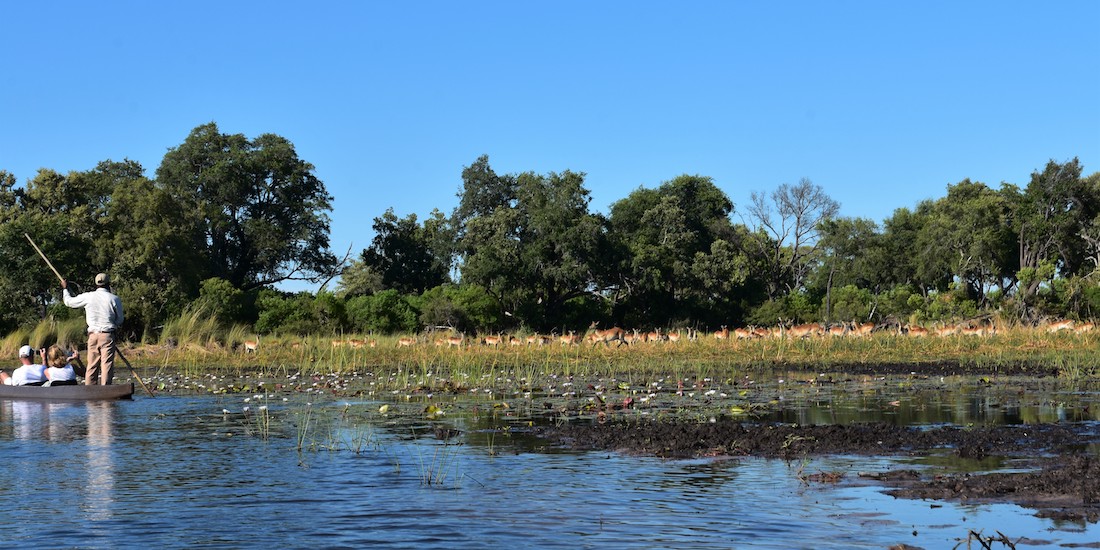 There are many more types of a safari than what stereotypes paint. While you might come across a more common safari type with ease, there is something to be said for the unique cast that a non-traditional tour of the wilds of Africa can give to your vacation and your memories.

Choosing the tour that best suits your lifestyle means taking control of your trip to Africa and possibly stepping completely outside of the stereotypical norm for a safari. There are plenty of choices out there for you to consider, and that means that it’s easier than one might expect when it comes to breaking the mould of an African safari.

Not sure which safari to try? Why not try them all! Or, contact us and tell us what you like and we can figure out which safari type you may like best.