‘Expect the unexpected’ is a go-to mantra for all travelers. Yes, we may experience delayed flights, wayward luggage, offline credit card machines.  For our own sanity’s sake, we just learn to ‘go with the flow’.

Yet those inconveniences pale in comparison to the encounters that simply take your breath away because you are in the right place at the right time.  And, if you are in the African bush, you are most likely with an exceptional guide!

We are talking about the unexpected, ‘off the charts’, jaw-dropping moments.  The encounters that create the foundation for stories you will tell family and friends for years to come.  These are the ‘WOW!’ sightings, the ‘OH MY WORD, did you see that?’ encounters.  Having your camera ready at all times is a must!

Here are a few stunning moments our guests experienced on a recent trip to Tanzania. 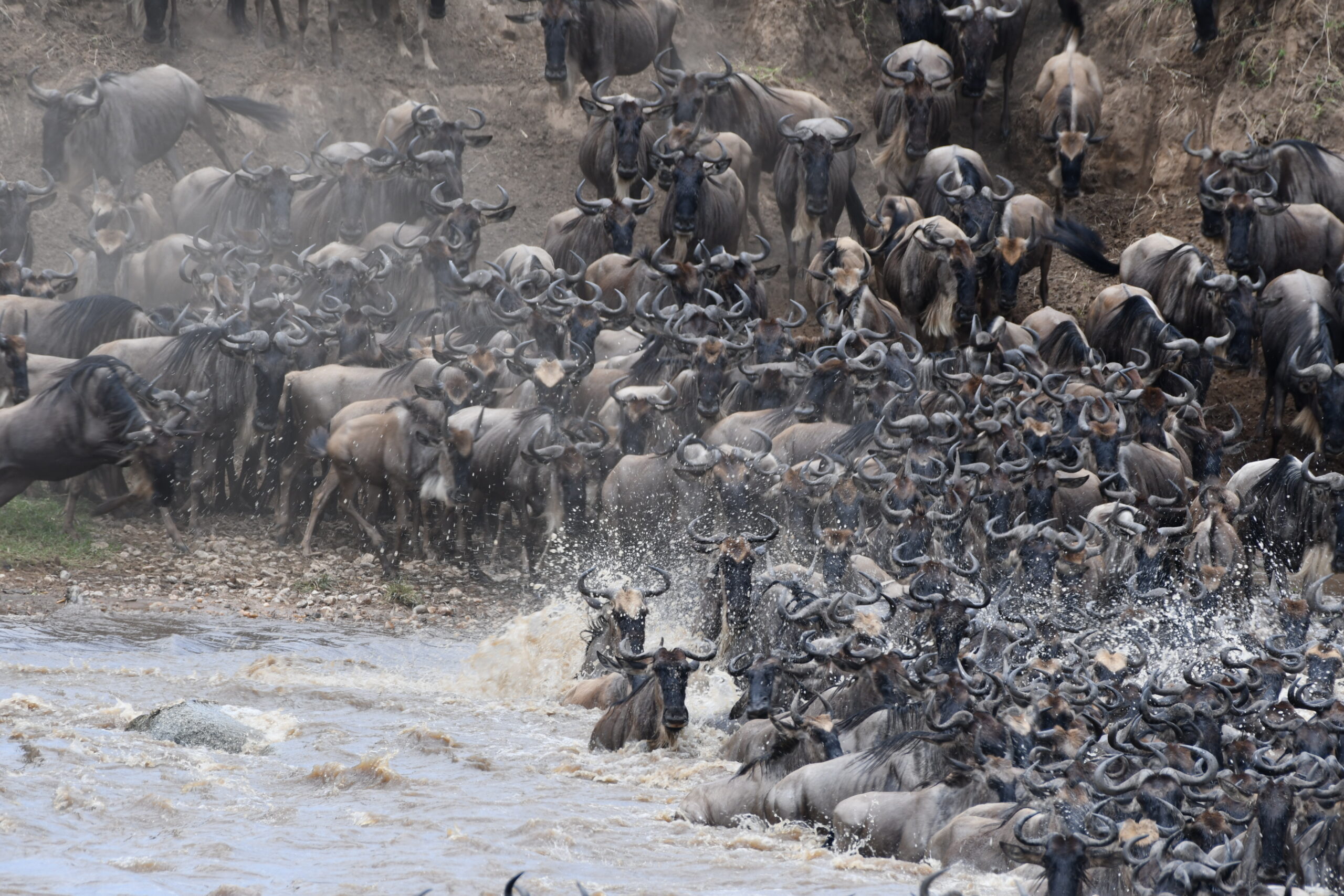 Witnessing the largest overland migration on earth is astounding! Each year some 2 million wildebeest, 200,000 zebra, and a variety of antelope migrate in a clockwise fashion over 1,200 miles. Their journey is in search of rain-ripened grass. Visitors can witness the crossing of the Mara River – in the northern sector of the Serengeti National Park, where Tanzania borders Kenya – for several months of the year. Our guests were fortunate to witness FOUR such crossings in just a few days. 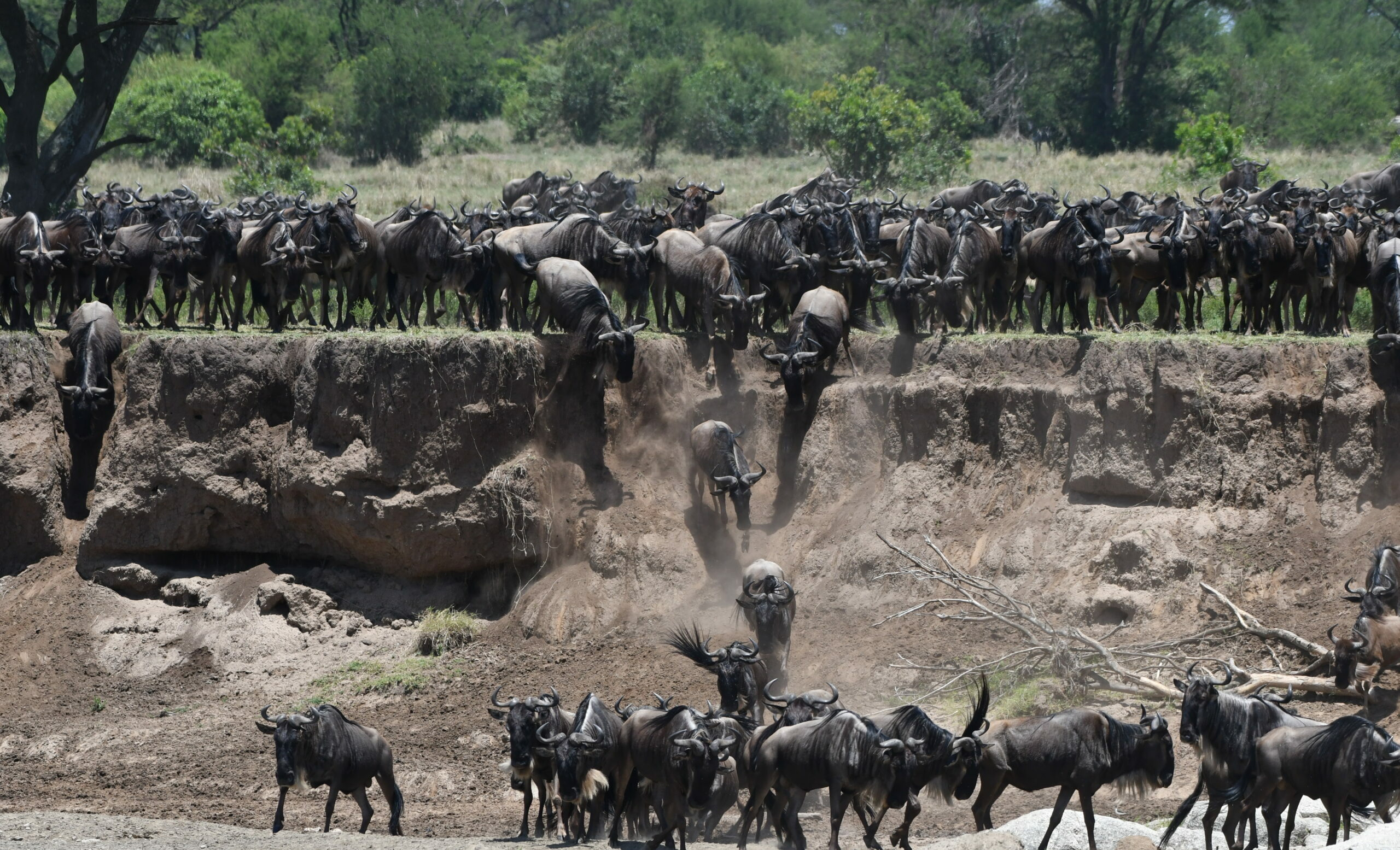 Herds, sometimes numbering in the thousands, gather at one of several crossing points.  They aimlessly mill until a brave leader steps into the water after which the others follow.  While the milling herd may seem chaotic, research has shown the wildebeest possesses what is known as ‘swarm intelligence’.  Simply put, they are systematically exploring and overcoming an obstacle as one. 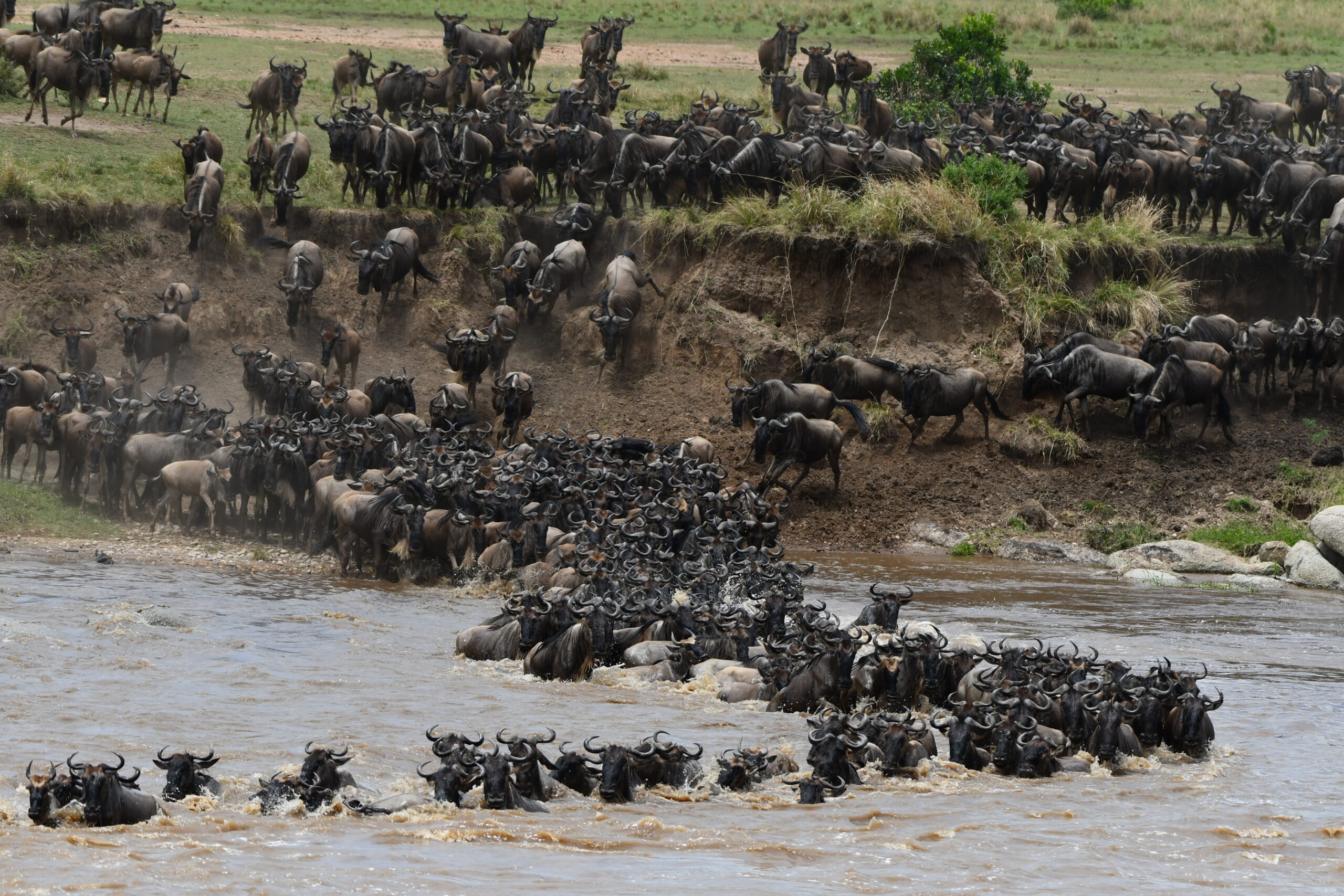 Strong currents are just one danger the animals face during the crossing. 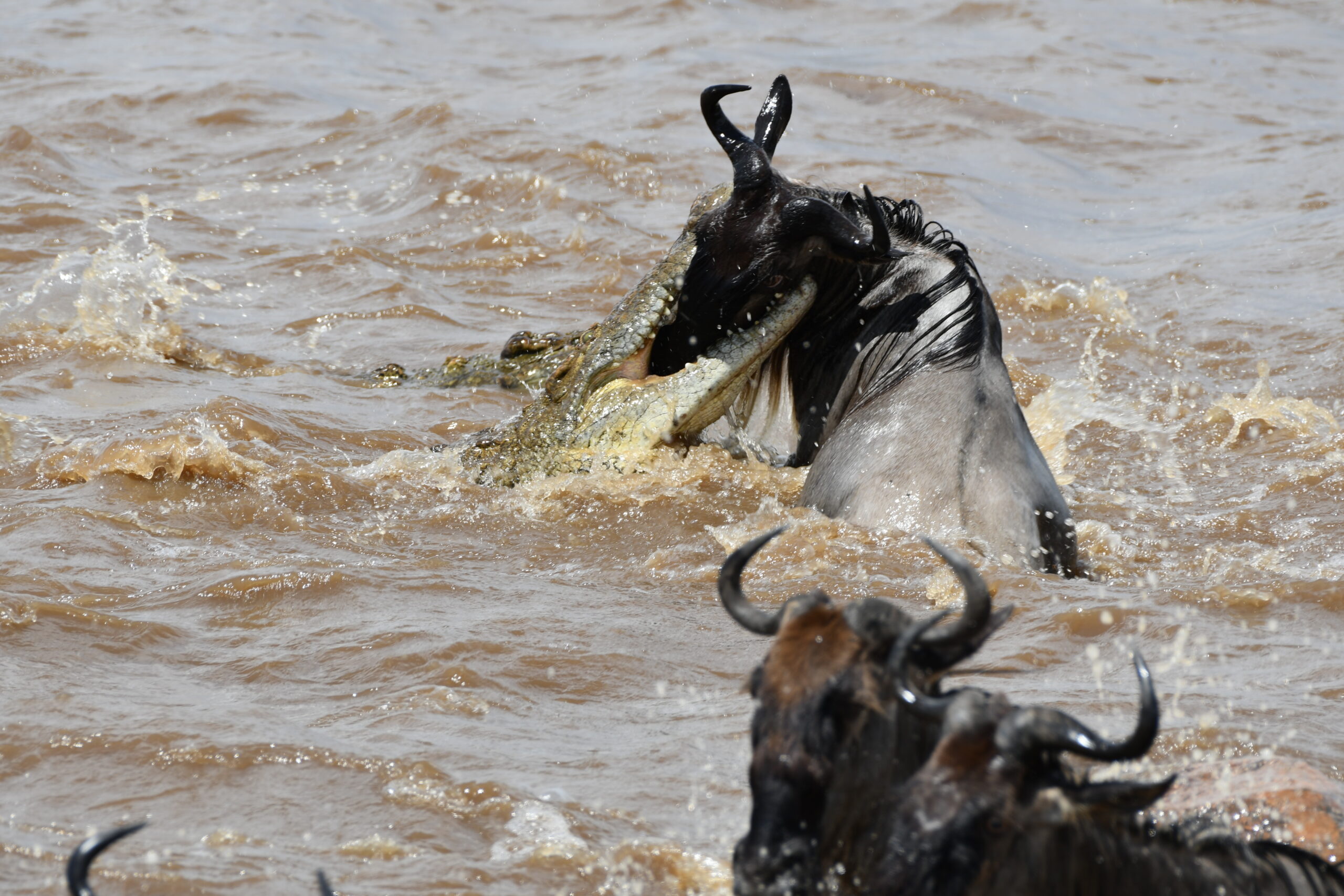 Crocodiles wait in anticipation to make an easy kill.  Typically crocs latch onto their prey and drown them – but sometimes their prey put up an enormous fight! 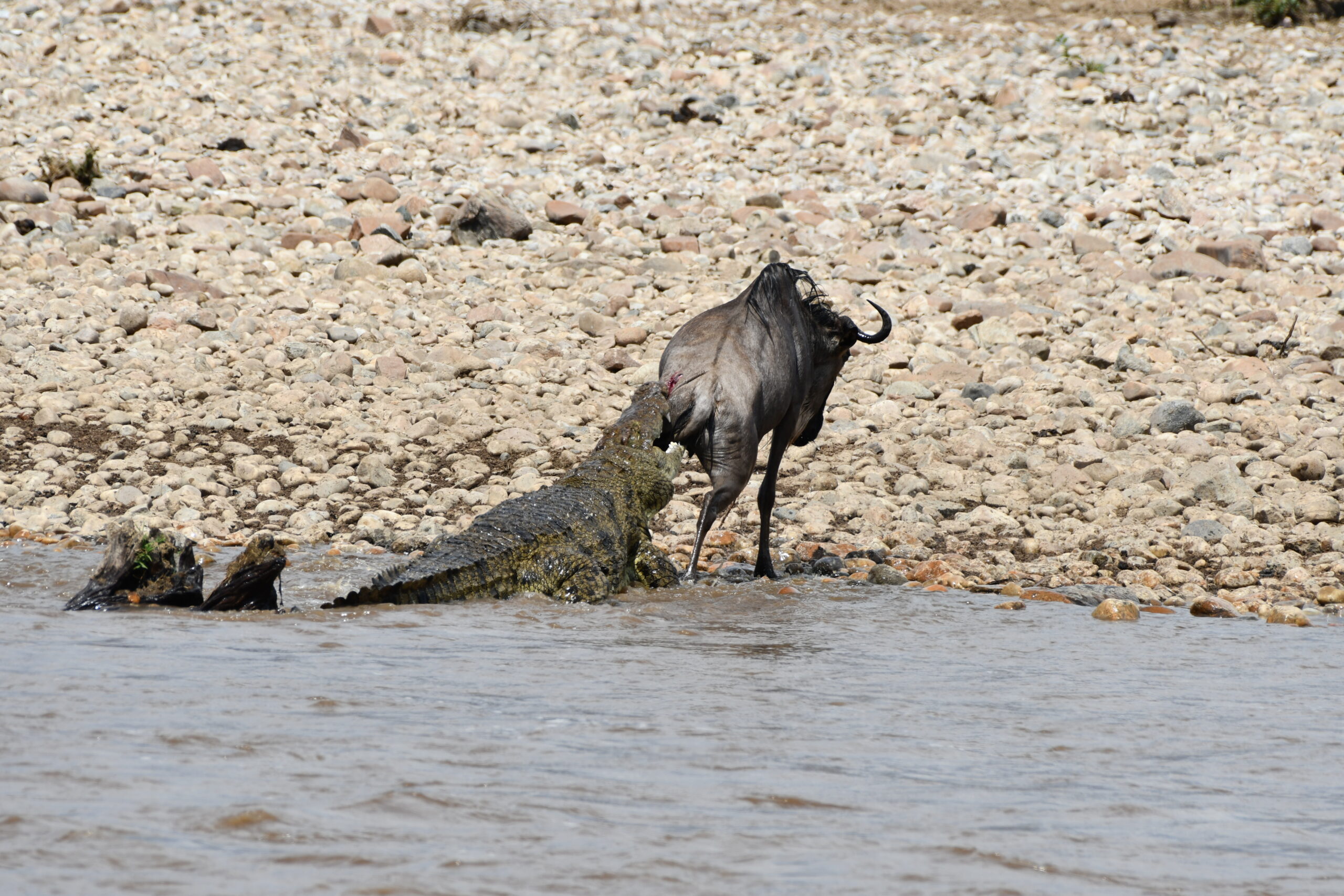 We witnessed a lengthy struggle between this wildebeest and its captor – a very large crocodile.  Incredibly, the wildebeest fought back and dragged the crocodile to the shore where it eventually escaped!  Unfortunately, its injuries were extensive, so it may not have survived too long following this epic battle. 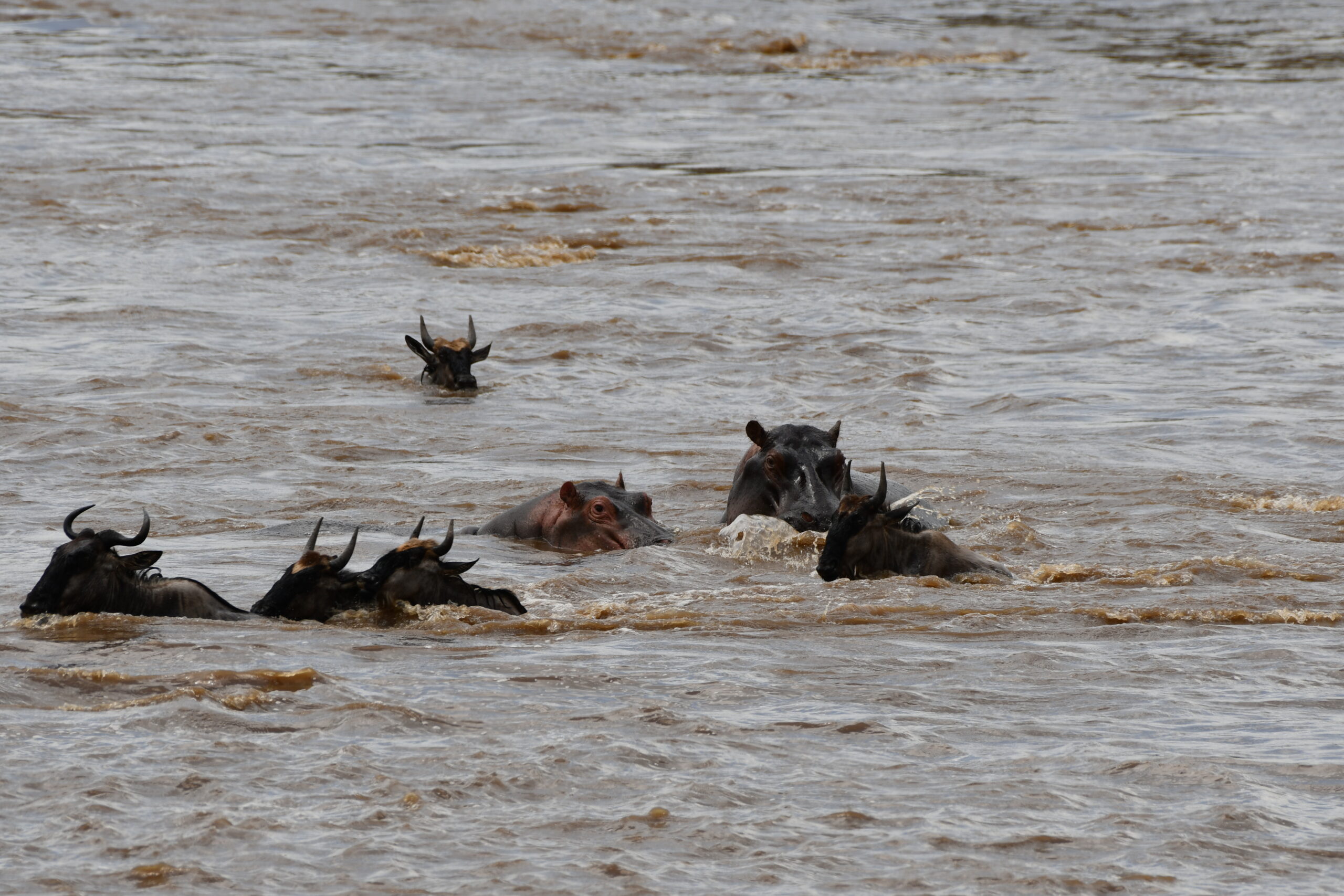 Another interesting observation was that the wildebeest had protectors of their own. These hippos were acting as a shield from the crocodiles. Hippos are the world’s deadliest large land mammal and crocs give them a wide berth. 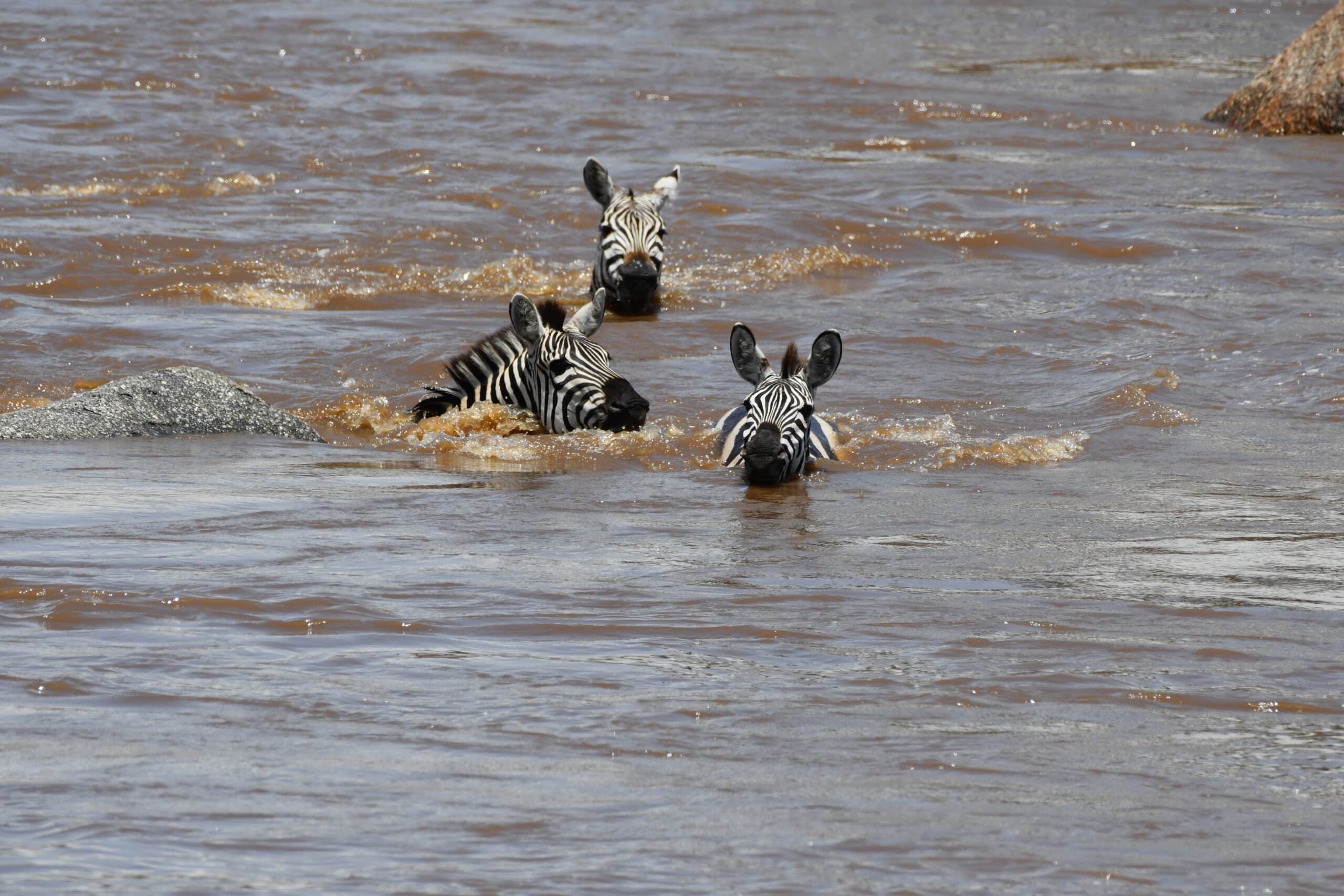 Many times it is the zebra who leads the way during a crossing.  Wherever we saw wildebeest, there were sure to be zebra in tow and vice versa.  The reason these two animals graze together in harmony is that they each eat different parts of the same type of grass.  Zebra feed on the long, tough grasses, while the wildebeest feed on the shorter grasses. 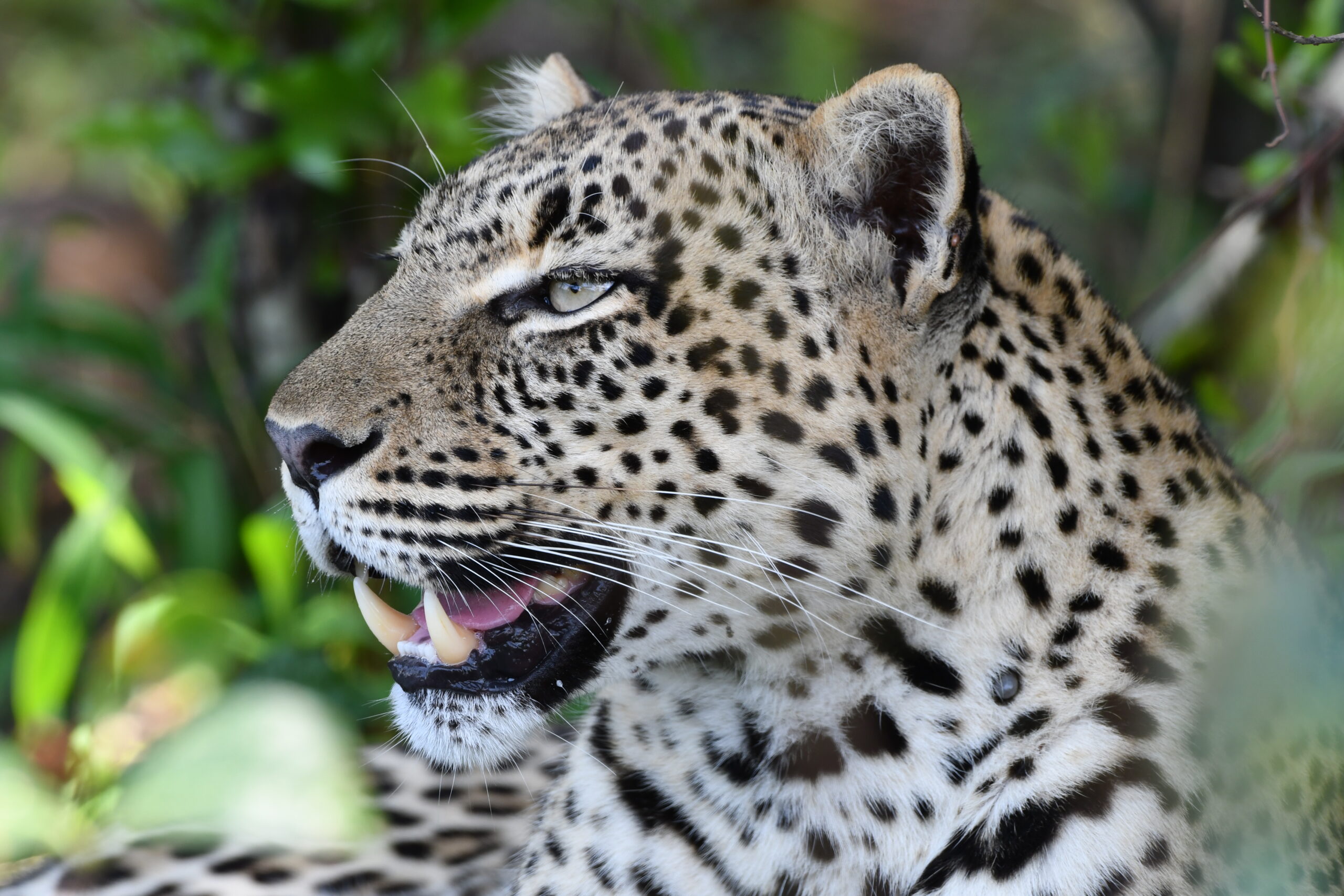 This magnificent female leopard is a ferocious hunter.  Typically elusive, just spotting a leopard is considered a ‘win’.  But to watch her hunt and subsequently kill a wildebeest, was beyond words!  With two cubs to feed, she was hunting every day and our guests were fortunate to witness her strength and prowess in action. 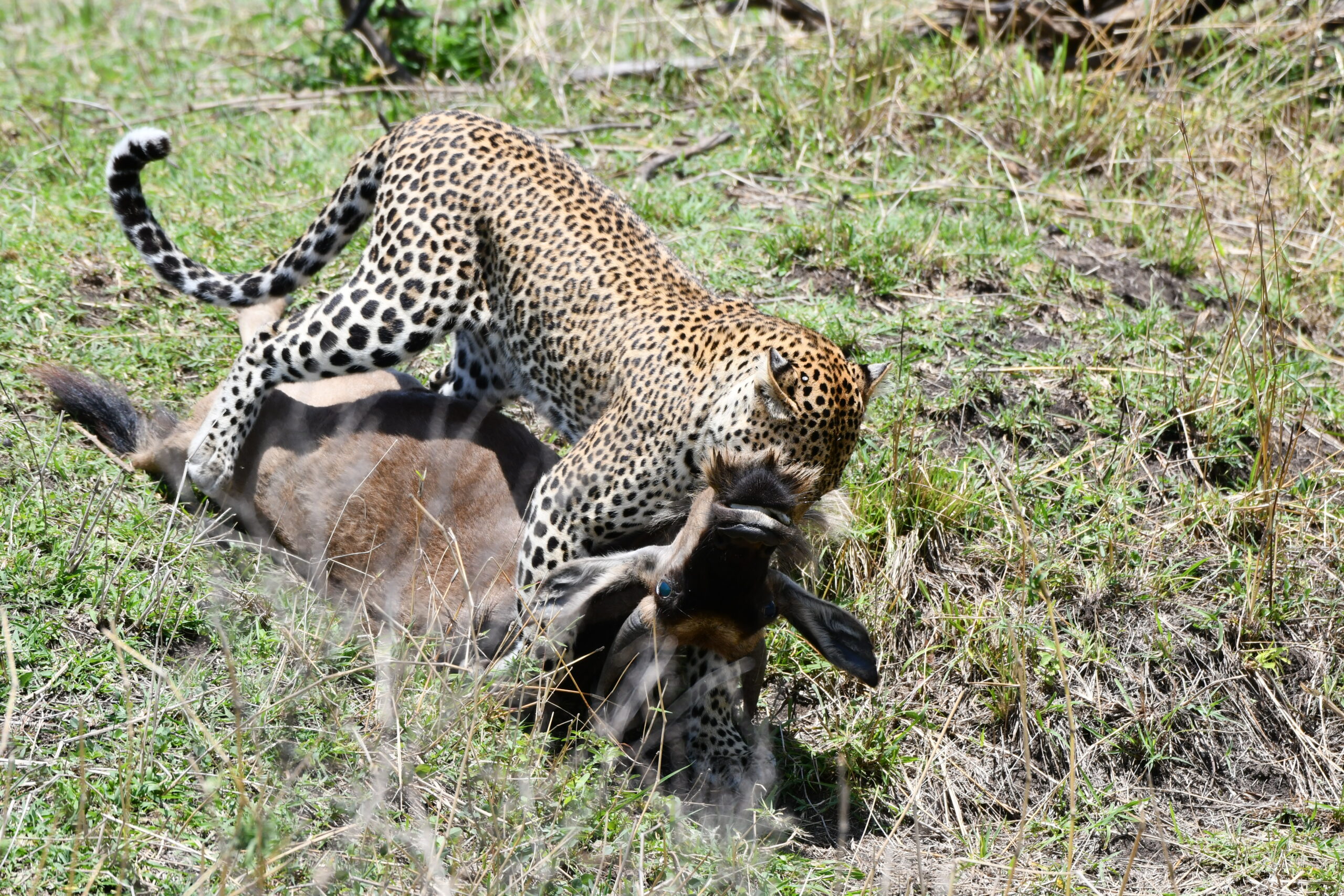 She made her kill in the heat of the day, a safer time for her to leave the cubs unattended.  Then, dragging the wildebeest some distance, she hid it under the cover of trees, out of sight of vultures and hyenas. Once she’d rested and regained her strength, she disappeared to check on her family and bring them back to feed.

The following day we caught sight of her again and both cubs.  Now that’s a once-in-a-lifetime experience we will never forget! 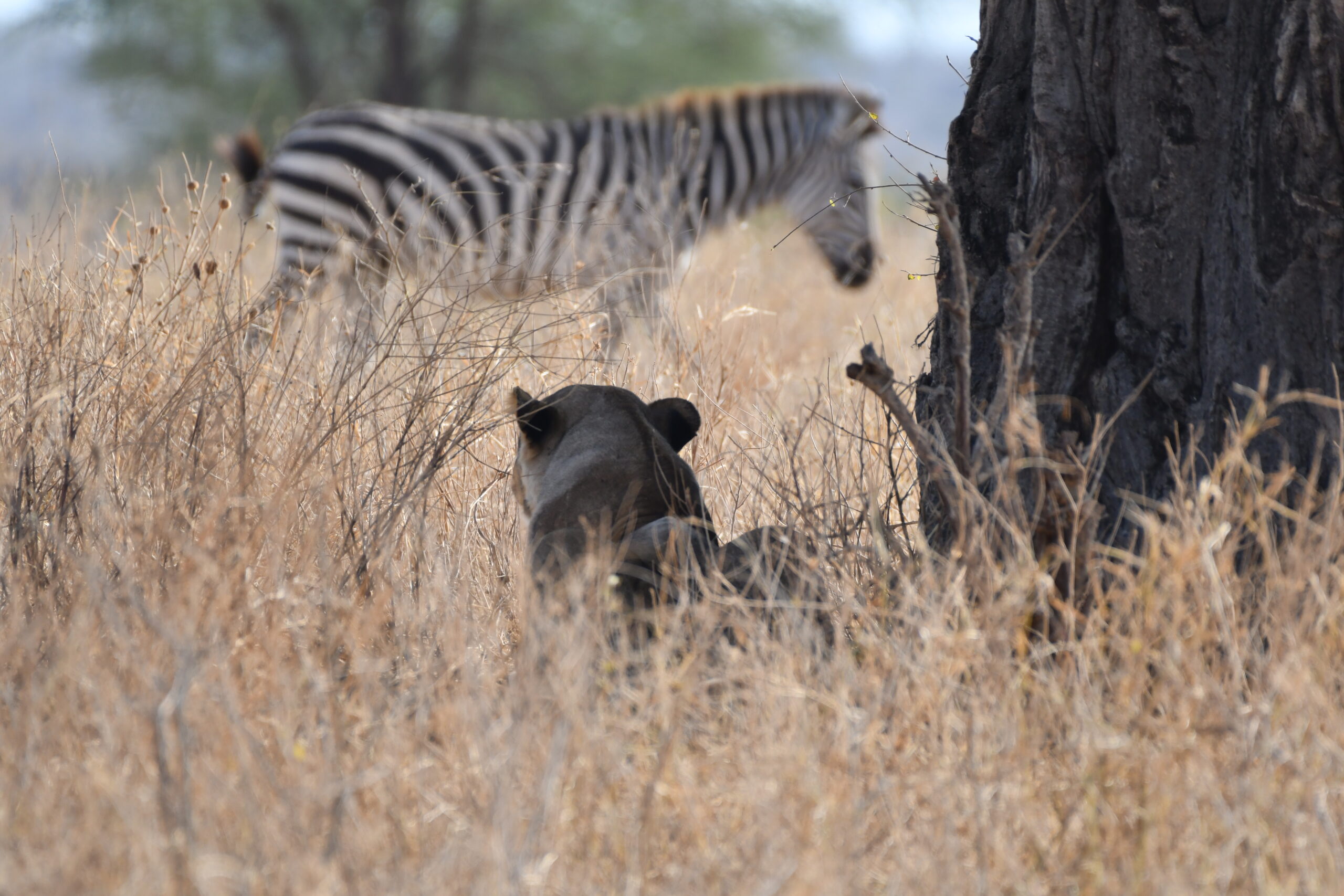 Thanks to several exceptional guides, our guests learned a great deal about the Big Cats.  We were spoiled with numerous lion encounters and saw firsthand how dependent the pride is on one another. The females not only give birth and care for the cubs, but they are also the hunters.  Males, for the most part, do not hunt as they use their size and strength to protect their pride. 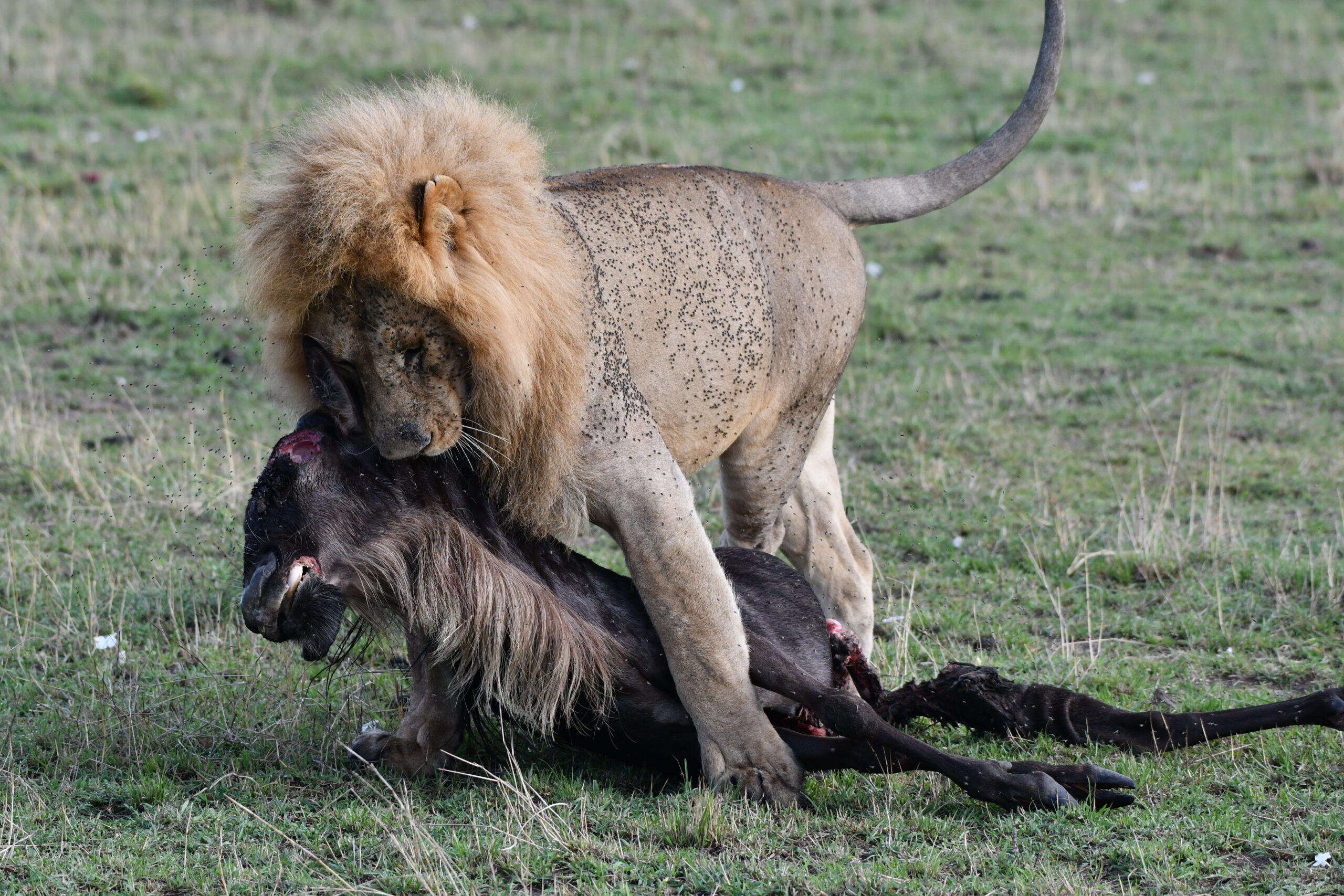 On an early morning game drive, we spotted this dominant male dragging a kill towards a tree.  The wildebeest had recently been hunted by the females and it wasn’t long before one of the lionesses spotted the lion, and came to meet him. 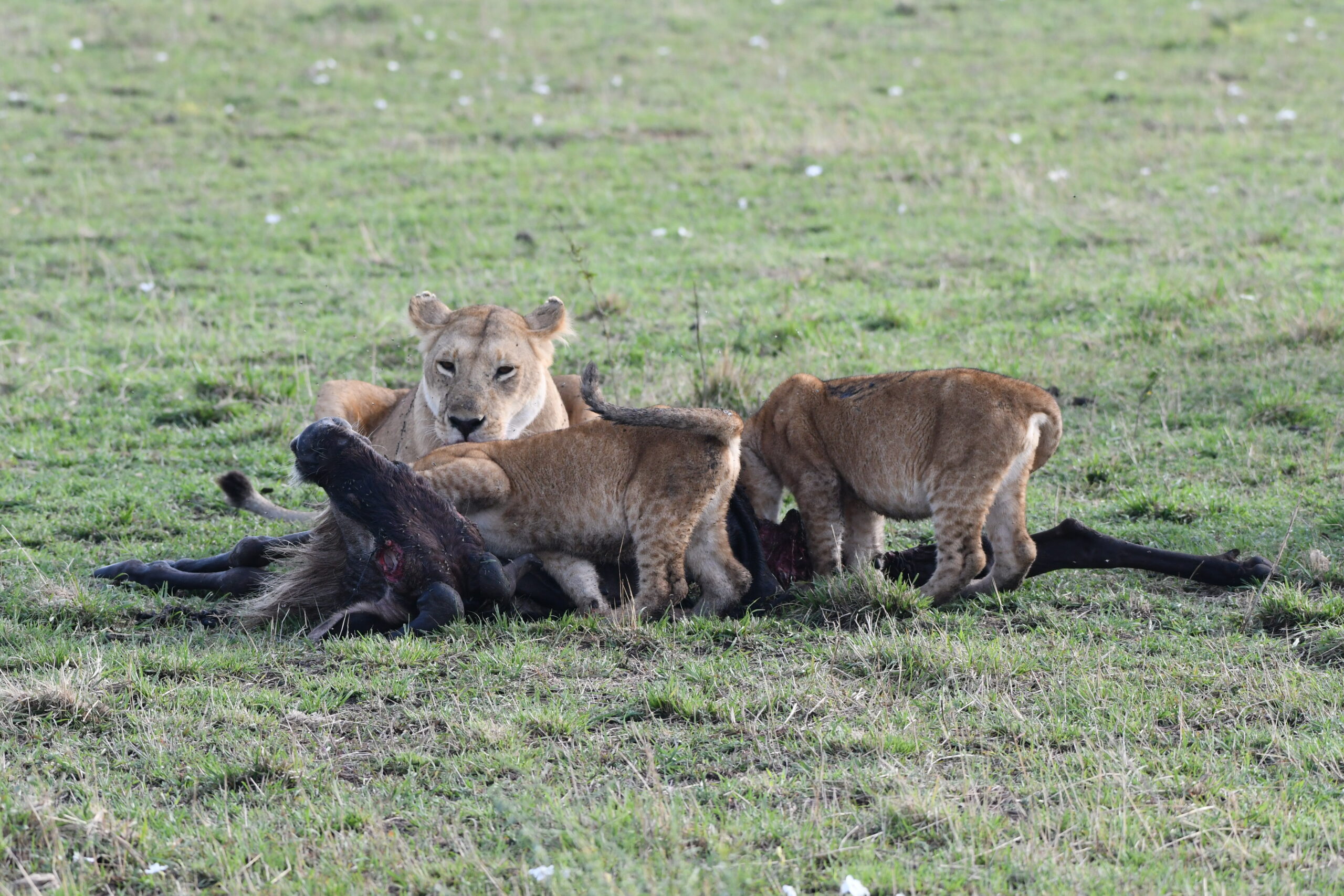 The male, father of 10 cubs in total in the area, had been pulling the kill closer to where the cubs were hidden and a second female soon rounded up the seven of the cubs and brought them over to feed. 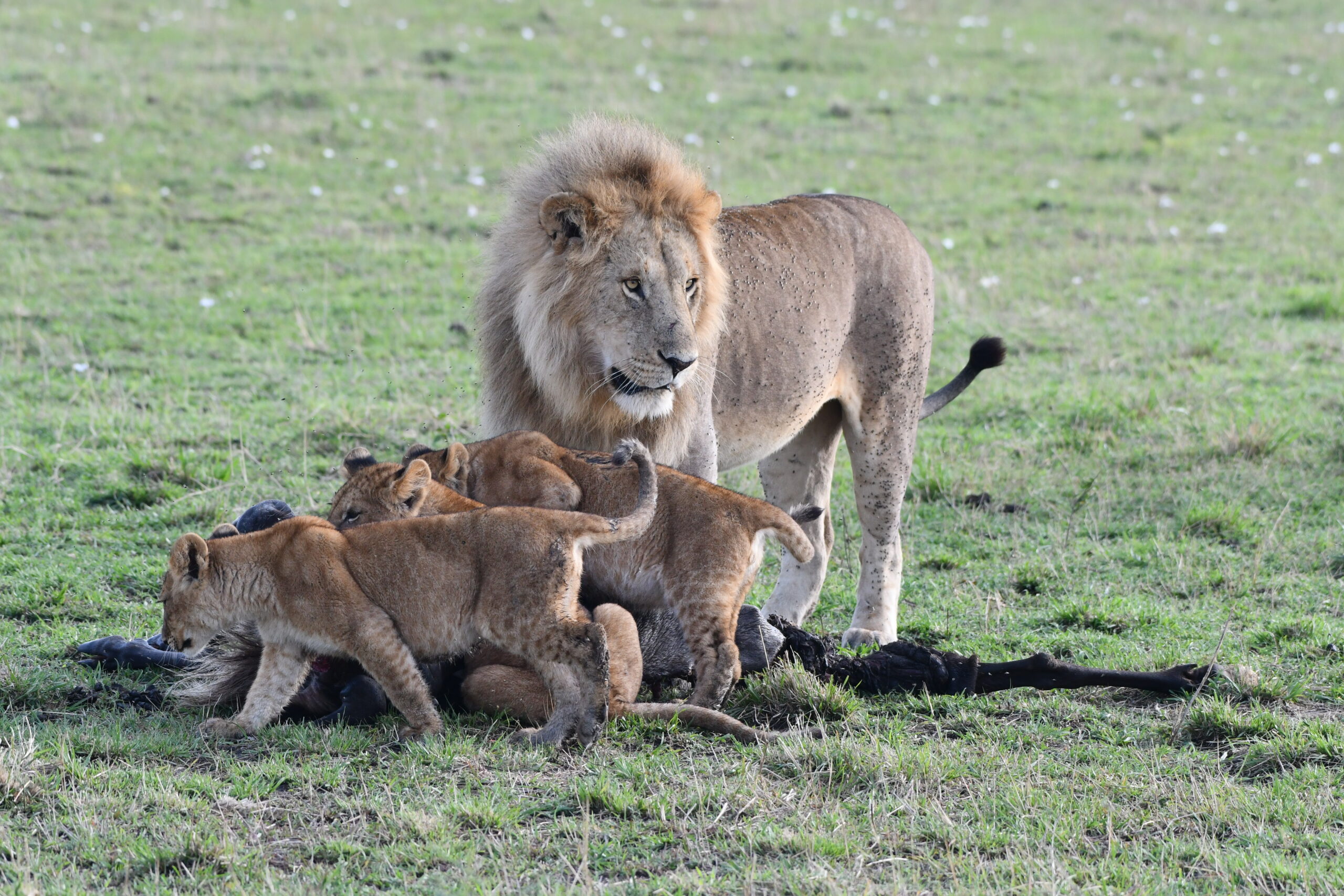 Once everyone had their fill, it was nap time.  Time and again we laughed about how similar these beautiful lions were to their smaller, domesticated cousins, particularly in the way they sleep . . . 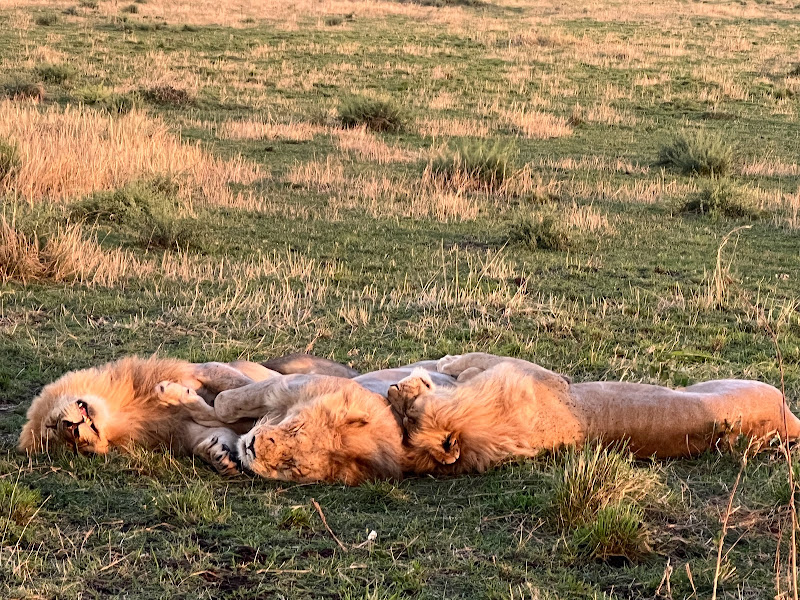 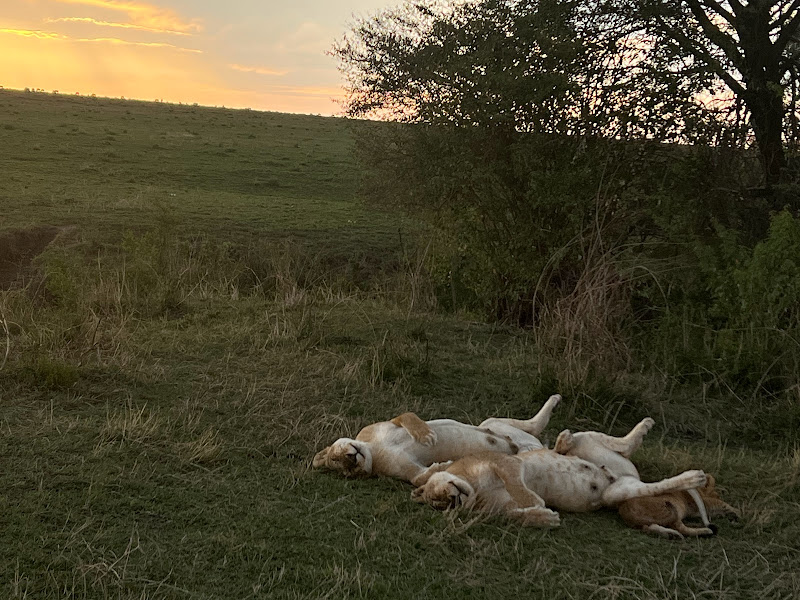 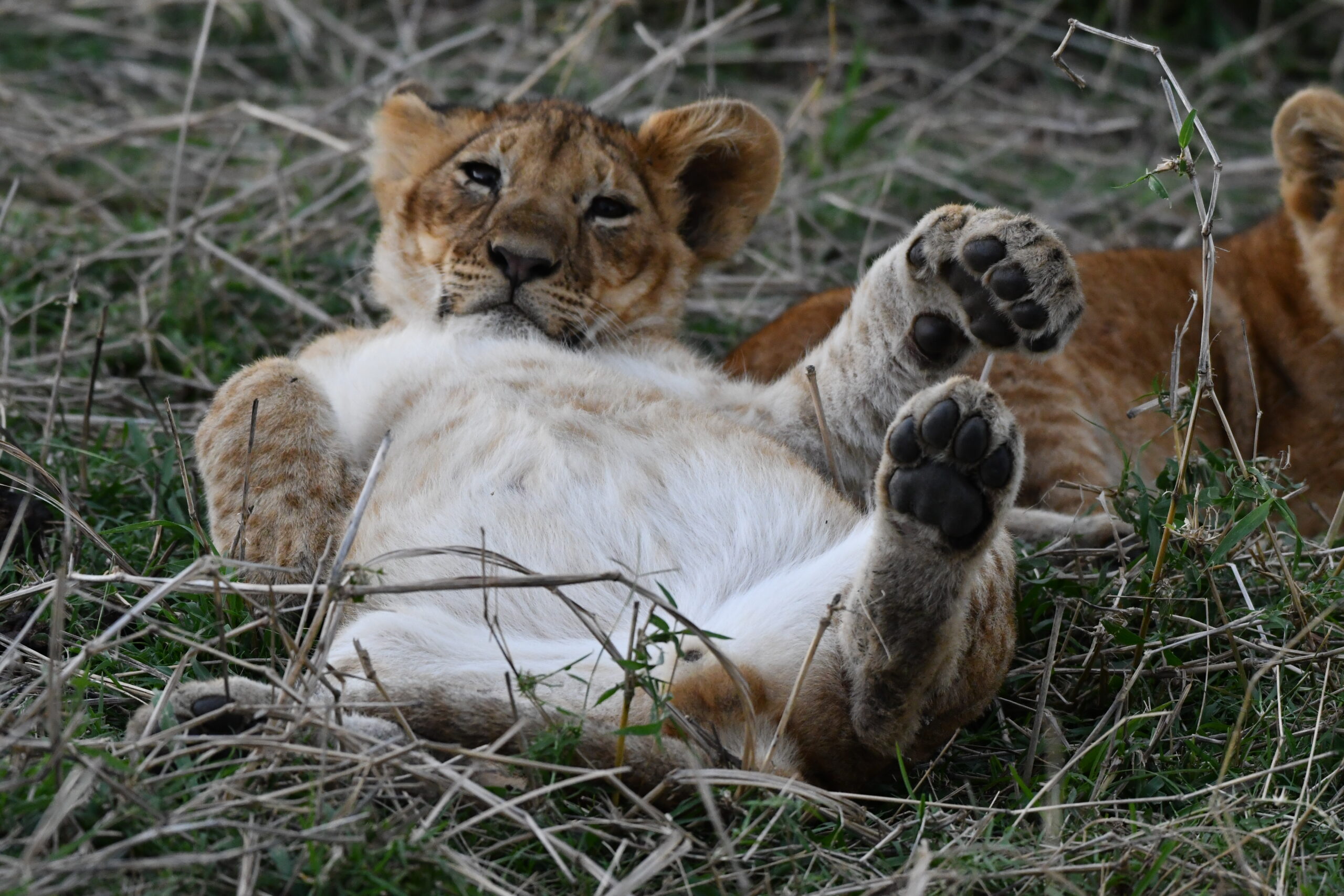 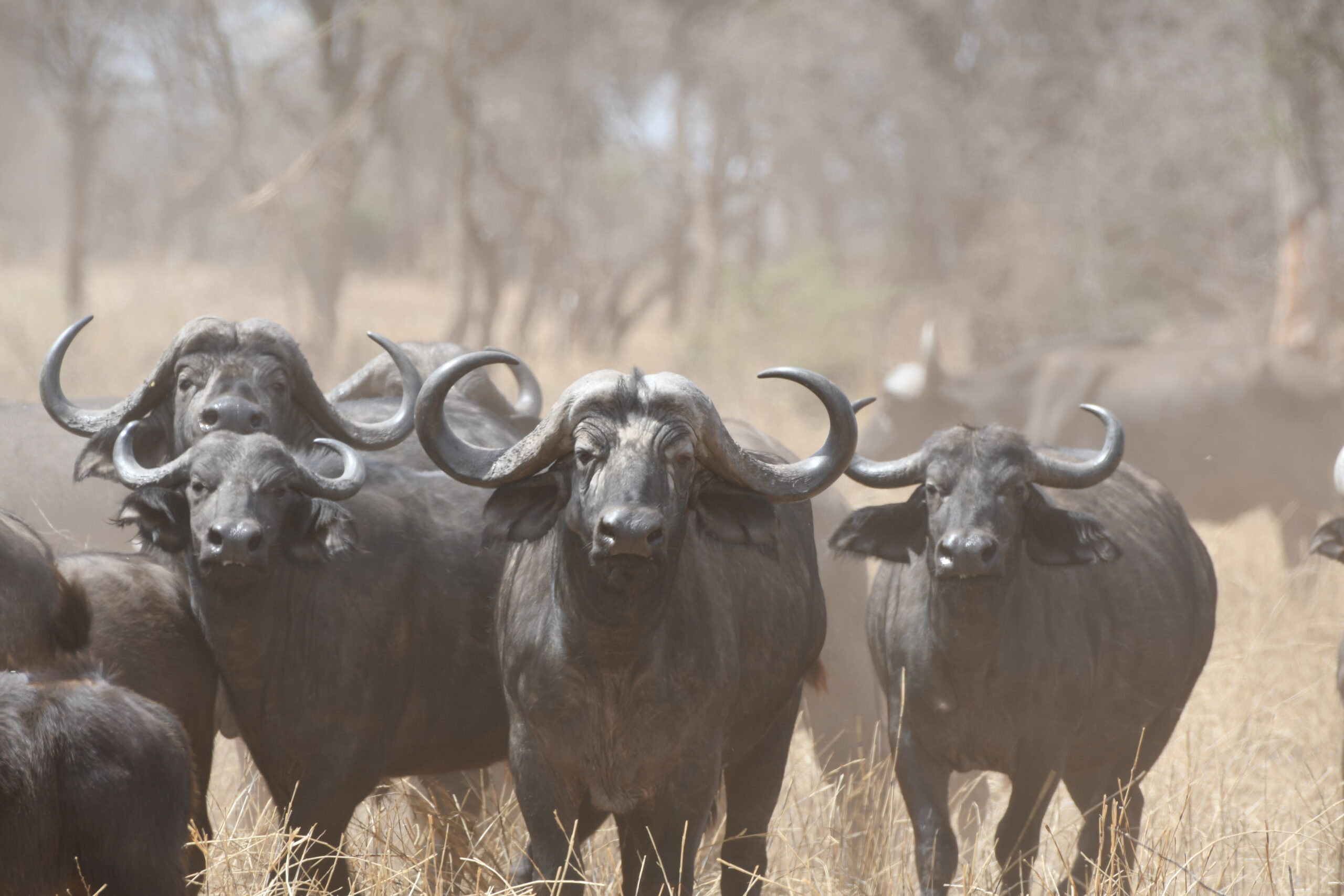 We would be remiss if we didn’t mention the many antelope, warthogs, elephants, and giraffes that roam the plains. Conservation is a high priority for Tanzania and significant progress has been made in bringing the black rhino back from the brink of extinction. To go to sleep to the sound of wildlife grazing nearby, and wake to find a herd of elephants and several zebra passing by your tent – well, it’s priceless.

Countless visitors to East Africa will agree, the region has countless ‘WOW’ moments waiting to happen.  The region is known for its warm hospitality, and luxurious accommodations in the heart of some of the world’s top game reserves, and guides that will open your eyes to the incredible wildlife of the region.

If you would like to join us on a trip to Africa, or if we can customize a trip of your own, please get in touch.