Our mission is to provide you with the ideal tiger fishing locations all along the Zambezi without you needing to fret or juggle the experience. Our expert team of veteran anglers make sure that the right locale is perfect for the right client; it’s not a job done unless it’s a match made in heaven and you have a big tiger on the end of your line.

We ensure that your safari adventure is a once-in-a-lifetime experience that you’ll be able to share with friends and family for decades to come. Step into magical Africa and the beautiful Zambezi, rich in history, ecology, and lore, and start your fishing adventure today.

The Zambezi, fourth largest river in the continent, is home to a myriad of wildlife along with Africa’s most desired fresh-water fish. It’s a total of 2,574 kilometers (1,599 miles) long, winding its way through Zambia, Eastern Angola, Namibia, Botswana, and Mozambique before letting out into the vast Indian Ocean. The gorgeous Victoria Falls, bearing the namesake of an English Queen, is one of the most striking and dramatic features of the entire Zambezi. When it comes to tiger fishing, the Upper and Lower Zambezi each present different and unique challenges and opportunities; they are divided by Victoria Falls. 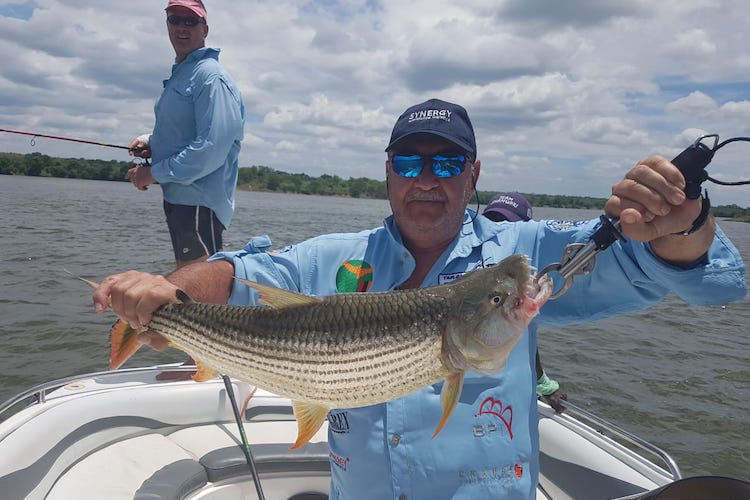 The Upper Zambezi flows into Angola from the southwest before being joined by the Chifumage and Luena tributaries. The floodplains unfold into verdant evergreens and dry forest on its western side. These floodplains are the most notable feature of the upper territories, with the largest being the Barotse. The ecosystem housed by the Barotse contains all manners of fauna and flora working in conjunction to feed the Zambezi. Commercial exploitation and intrusive human settlements are made impossible by the veracity of these shifting floodplains, creating the perfect habitat for tigerfish to be caught.

When to visit the Upper Zambezi

However, timing your trip is paramount as the odds of catching a tiger varies with the seasonality of the Upper Zambezi as well. In late fall, the rains begin to pour in earnest until after the new year when the river shatters its banks. By April, the flooding is at its highest. At this point, the floodplain spans a whopping 50 kilometers in some areas. It’s now when the aquatic organisms sprawl out as well to feed, mate, and collect nutrients. During May, baitfish are lured into the main channels of the Zambezi and lure the tigerfish in-turn. By the middle of June, tigerfish are on the prowl for their prey; this is the ideal time for fly fishing for tigers. This window of opportunity lasts until August. Then, the rains begin again around October as the river reaches its lowest point, flushing out the tigers and their prey until next year. 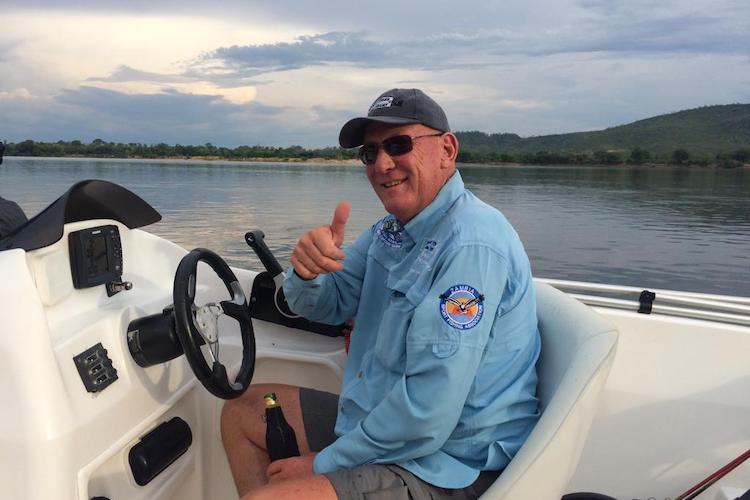 The Lower Zambezi south of Victoria Falls yields a marvelous vista of the Zambezi escarpment and provides a new battleground for determined fishermen to test their mettle against the tigerfish. Nestled in south-eastern Zambia, this portion of the Zambezi flows alongside the Lower Zambezi National Park. A relatively young tourist destination, there are strict governmental controls regarding traffic and boating through the area so as to not disturb the wildlife. There is also no human settlement permitted for construction, which keeps the ecosystem cycle flowing as smoothly as the river itself. Fishes are also protected from netting and over-fishing. However, it’s important to note that the Lower Zambezi is not as exclusive as the Upper Zambezi is on average for fly fishers.

When to visit the Lower Zambezi

The timing of your trip to the Lower Zambezi is just as important as though you were traveling the Upper. The rainy season begins in November, and by March the river rises and breaks its banks. However, the muddiness of the Lower is generally more challenging than the upper during this phase to navigate and to fish. The optimum time for fly fishing is much the same as well, however, the Lower can at times become clearer and warmer in the summer.

Wildlife of the Zambezi River

Providing resources and a home for most of Africa’s most iconic animals, The Zambezi is extraordinarily diverse. Hippopotamuses are numerous along the calmer segments of the river, lurking just at the cusp of the surface for food. Nile crocodiles join them; they hunt for prey with teeth to rival a tigerfish. Great birds in abundance featuring pelicans, herons, African fish eagles, and egrets dot the river with sunning monitor lizards to accompany them. The Upper and Lower Zambezi also feature the iconic zebra herds roaming the floodplains, marking the true beauty of the landscape with their stripes. Below the surface could even creep the bull shark, often called the Zambezi shark, hunting its prey with silent determination. 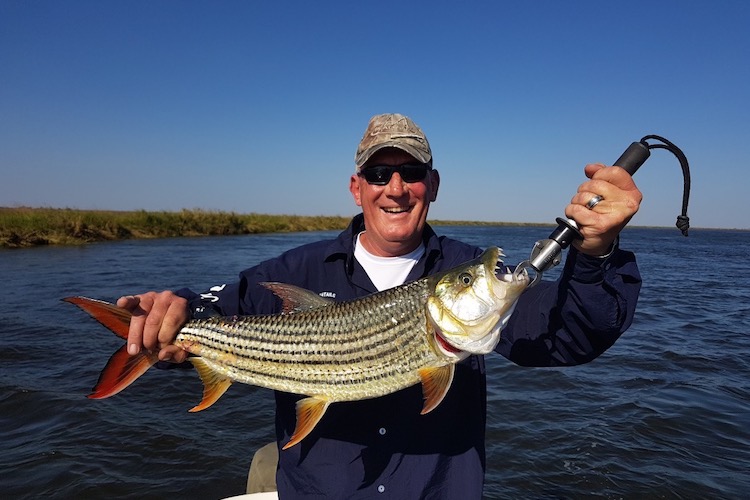 The tigerfish is known by some as the “striped water dog” due to the unique scale pattern and its sharp teeth. Extremely aggressive and territorial, the tigerfish feed on small baitfish as its primary food source. It’s a species that favors warmer waters with a high oxygenation level. It’s also one of the fastest-swimming fish in the Zambezi despite its hefty max weight of 30 pounds.

It’s considered to be the African equivalent of South America’s piranha, although the two are not related biologically in the slightest. Like piranha, tigerfish hunt in packs and frequently seek out weakened and bloodied prey when possible, delivering the killing blow as a swarm. One or two sentinels peel off the group, taking large chunks from the prey before the rest of the fish mass hurls themselves hungrily into the feast. The African tigerfish is the only freshwater fish to ever be recorded catching and eating birds mid-flight; this is but a tribute to their famed aggressiveness.

Where to find African tigerfish

Tigerfish can be found in the Congo as well in the Congo River; the goliath tigerfish can weigh over 150 pounds with teeth as equally menacing to match. The Okavango Delta is also home to tigerfish, though not always as prevalent as in the Zambezi River proper. 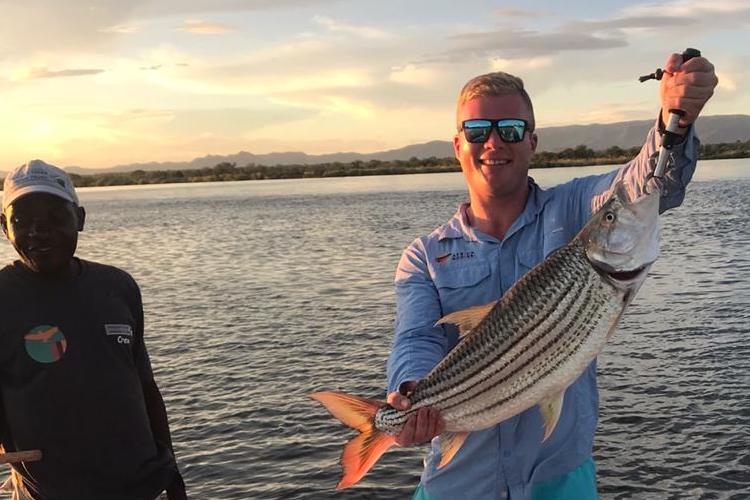 The average catch will weigh in between 12 and 18 pounds, but you never know if you’ll be breaking records and topping the scales at 30 or more.

The tigerfish put up a ferocious struggle; it dramatically flips about in a display of nearly unrivalled acrobatics after being successfully captured. It’s paramount to make sure to have a firm grip for any photos; the tigerfish is known to be quite the trickster when given the opportunity. Keep fingers clear of the mouth at all times; they easily have the capacity to take off more than just a few layers of skin. Our expert guides will walk you through each step of the process, but it’s suggested you bring a strong pair of arms and a back that can fight some of the larger fish who refuse to be reeled in without putting up a decent fight.

Do keep in mind that tiger fishing is catch-and-release only. This is paramount in order to protect the wildlife from being overfished so that future generations of sportsmen can experience the thrill of hooking such a beautiful fish in such scenic surroundings.

Why you should fish for tigerfish on the Zambezi

Tiger fishing on the Zambezi makes for a real experiential trophy for any fly fisherman who’s skilful enough to hook one.

Overall, tigerfish fly-fishing is the ultimate safari-like experience, and it is accessible for even novice fishermen. Prepare your gear and kit to enjoy the sights, smells, and sensations of Africa while angling for one of the continent’s most well-known and mystical river beasts.

Fish-on? Contact us today to arrange a trip or find out more.